Review Sony A6000 - Best Performance Competitive Prices - First look at Sony A6000, I remember Sony NEX 6 and NEX 7 I've ever used some time ago. Because of my experience that, then I would be a little comparing with both cameras. Sony A6000 is designed to replace the Sony NEX 6 & 7 at once. The size is a little box rangefinder-style (classic camera) with a viewfinder on the left top of the camera. Slightly different from the NEX-6 is the upper side of the camera more than a box-shaped curve / curved and slightly thicker (about 2mm). This change gives the impression of a more masculine. Then the mode wheel separated from the main control wheel. I actually prefer the design of the NEX 6 because the wheels on the A6000 became smaller and a little less comfortable position. I prefer that control wheel in the middle and modes on the right. However, in practice this is not a big problem. after using a bit long, so accustomed. The presented by technphone.com 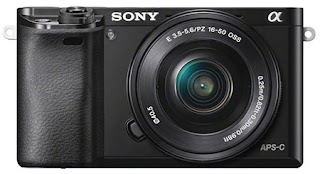 The significant difference that I feel is in the auto focus system. Sony A6000 has a 179 point phase detection to the ends of the image (see illustration) while the NEX 6 or 5T only covers the middle area only. The Results of this implementation makes A6000 very quick to follow moving subjects in bright light conditions (outdoor). Only the most top DSLR cameras can match. in a slightly darker light conditions, such as interior or night, the autofocus system switched to a slower contrast detection. still good for the subject not to move but weak to follow a moving subject.

The greatness of this AF system along with the speed of consecutive photos very quickly that 11 images per second with continuous autofocus. Greatness can only be equaled by the camera topmost level in the range of DSLR cameras such as the Canon 1DX.

One feature that I still worry about is about the resolution EVF viewfinder derived from 2.4 million in the Sony NEX 6.7 point to only 1:44 million points. In the field, when the sun was blazing, 1:44 million points have been very good with a very fast response. In dark lighting conditions, clarity and speed (refresh rate) on the viewfinder declined and began to look much noise / spots. fortunately, in general still clearly visible and quite bright. I think the downgrade decision viewfinder resolution is intended to save battery.

I look at the picture quality of Sony A6000 is also a slight increase from the NEX 7 equally 24 MP. It looks like the new BIONZ processor is good enough to make the photo a bit sharper. Dynamic Range for capturing detail dark and bright areas are also better relative to the cameras with APS-C sensor more.

The image quality is very good at ISO 100-400. New Noise appears slightly at ISO 800. Images with an ISO setting of 1600 and 3200 started a lot of noise, but I think the picture is still okay to ISO 3200. noise still smooth and detail are still a lot. easily smoothed in Light room software. Although in this camera provides ISO up to 25600, but the quality is very less. When zooming in the photos have been less sharp definition to print large size, but for web display or screen smartphone, with a small size can still be enjoyed.

The unique Thing that I have found in this camera are additional applications that can be downloaded via Sony Play memories. Each application provides an easy way to create special effects or allowing photos of automation of some techniques such as focus bracketing, multiple exposure, time lapse and others. Some applications are free, while others have to pay between 60rb to 120rb's.

Going forward Sony will develop and release new apps-apps. I think this is very good because in the future, the camera features will grow with apps. My hope Sony provide free all apps, so users happy. But on the other hand if it's all free later Software engineer Sony to eat? So I think it is quite realistic that some apps are complicated.

The menu system from Sony A6000 also overhauled from NEX. The menu system is more like the style of the Sony Alpha, following the change of name. The camera menu system more regularly impressed with the system and menu category per-page than the NEX menu system that roll endlessly. However, I think the menu system is not perfect. There are new terms are a bit odd as Audio Signals is actually the Sound / Beep. Placement of the functions that I often use such card format is in category 5 and page 5. It's better if Sony gives a special page so that users can record frequently used menu items on the page as in DSLR cameras in general (My Menu).

It still needs to be improved is the speed when turning on the camera. It takes about 2 seconds to wait for the camera ready to shoot something after power on. and also the speed of the process for applications (apps) enhancements such as multiple exposure, etc.

Impressions of the above, I think Sony A6000 camera is quite capable as all-round, from outdoor shoot something bright to dark, from a static view to fast-moving subjects. The size is also relatively small and lightweight. For users of earlier such as Sony NEX NEX 3 and 5, A6000 camera is a significant improvement. While the NEX NEX 6 and 7 you will get a quality autofocus for moving subjects better and menu systems are better organized and more options for customizing opportunities camera buttons.

Sony A6000 is most suitable for photography enthusiasts who crave a camera that does not burden when the streets, street photography, photography action / sports and documentation of family occasions. ( Downlad BBM Mod )
Posted by john clinton at 6:03 AM

Email ThisBlogThis!Share to TwitterShare to FacebookShare to Pinterest
Labels: Camera